“On the great night of the Destroyer’s wrath, when its terror was at its height, there was a hail of rocks and the Earth heaved as pain rent her bowels. Gates, columns and walls were consumed by fire and the statues of gods were overthrown and broken. People fled outside their dwellings in fear and were slain by the hail. Those who took shelter from the hail were swallowed when the Earth split open.”

“The habitations of men collapsed upon those inside and there was panic on every hand, but the slaves who lived in huts in the reedlands, at the place of pits, were spared. The land burnt like tinder, a man watched upon his rooftops and the Heavens hurled wrath upon him and he died.”

“The land writhed under the wrath of the Destroyer and groaned with the agony of Egypt. It shook itself and the temples and palaces of the nobles were thrown down from their foundations. The highborn ones perished in the midst of the ruins and all the strength of the land was stricken. Even the great one, the first born of Pharaoh, died with the highborn in the midst of the terror and falling stones. The children of princes were cast out into the streets and those who were not cast out died within their abodes.”

“There were nine days of darkness and upheaval, while a tempest raged such as never had been known before.” 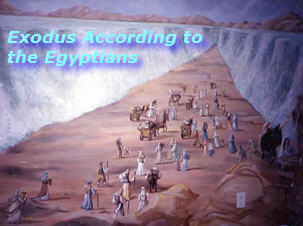 “Fire mounted up on high and its burning left with the enemies of Egypt. It rose up from the ground as a fountainand hung as a curtain in the sky. In seven days, by Remwar the accursed ones journeyed to the waters. They crossed the heaving wilderness while the hills melted around them; above, the skies were torn with lightning. They were sped by terror, but their feet became entangled in the land and the wilderness shut them in. They knew not the way, for no sign was constant before them.”
….
“Pharaoh had gathered his army and followed the slaves.”

“After he departed there were riots and disorders behind him, for the cities were plundered. The laws were cast out of the judgement halls and trampled underfoot in the streets. The storehouses and granaries were burst open and robbed. Roads were flooded and none could pass along them. People lay dead on every side. The palace was split and the princes and officials fled, so that none was left with authority to command. The lists of numbers were destroyed, public places were overthrown and households became confused and unknown. ”

“None could see, except for the fiery glow and the unceasing lightnings which rent the covering cloud overhead. A whirlwind arose in the East and swept over the encamped hosts. A gale raged all night and in the red twilit dawn there was a movement of the Earth, the waters receded from the seashore and were rolled back on themselves. There was a strange silence and men, in the gloom, it was seen that the waters had parted, leaving a passage between. The land had risen, but it was disturbed and trembled, the way was not straight or clear. The waters about were as if spun within a bowl, the swampland alone remained undisturbed.”

“From the horn of the Destroyer came a high shrilling noise which stopped the ears of men.”

“The slaves had been making sacrifices in despair, their lamentations were loud. Now, before the strange sight, there was hesitation and doubt; for the space of a breath they stood still and silent. Then all was confusion and shouting, some pressing forward into the waters against all who sought to flee back from the unstable ground.”
“Then, in exaltation, their leader led them into the midst of the waters through the confusion. Yet many sought to turn back into the host behind them, while others fled along the empty shores.”

“All became still over the sea and upon the shore, but behind, the Earth shook and boulders split with a great noise. The wrath of Heaven was removed to a distance and stood upwards of the two hosts.”

“…they were foretold by strange omens in the skies. All men were silent and went about with pale faces. …”
“Fear walked the land and women became barren with terror, they could not conceive, and those with child aborted. ….Pregnant women miscarried and the seed of men was stopped. …”
“The days of stillness were followed by a time when the noise of trumpeting and shrilling was heard in the Heavens, and the people became as frightened beasts without a herdsman, as asses when lions prowl without their fold.”

“The dead were no longer sacred and were thrown into the waters. Those already entombed were neglected and many became exposed. They lay unprotected against the hands of thieves. He who once toiled long in the sun, bearing the yoke himself, now possessed oxen. He who grew no grain now owned a storehouse full. He who once dwelt at ease among his children now thirsted for water. He who once sat in the sun with crumbs and dregs was now bloated with food, he reclined in the shade, his bowls overflowing.”

“Cattle were left unattended to roam into strange pastures, and men ignored their marks and slew the beasts of their neighbours. No man owned anything.”

“The public records were cast forth and destroyed, and no man knew who were slaves and who were masters.”

“Plague was throughout the land, the river was bloody and blood was everywhere. The water was vile and men’s stomachs shrank from drinking. Those who did drink from the river vomited it up, for it was polluted. The dust tore wounds in the skin of man and beast. ”

“The Doomshape, called the Destroyer, in Egypt, was seen in all the lands whereabouts. In colour it was bright and fiery, in appearance changing and unstable. ….Doomshape is like a circling ball of flame which scatters small fiery offspring in its train.”

“In colour it was bright and fiery, in appearance changing and unstable. It twisted about itself like a coil, like water bubbling into a pool from an underground supply, and all men agree it was a most fearsome sight.”

…
“They will hear the trumpet and battle cry of the Destroyer and will seek refuge in the den in the Earth.”

“When it passed away brother buried brother throughout the land. Men rose up against those in authority and fled from the cities to dwell in tents in the outlands.”
….

“A strange people came up against Egypt and none stood to fight, for strength and courage were gone.”

“They enslaved all who were left, the old, young men and boys. They oppressed the people and their delight was in mutilation and torture. Pharaoh abandoned his hopes and fled into the wilderness beyond the province of the lake, which is in the West towards the South. He lived a goodly lif e among the sand wanderers and wrote books.”